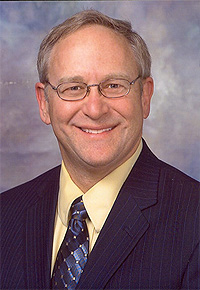 Tod Corrin, a 44-year Downey resident, graduated from Lewis and Clark College with a Bachelor of Science degree.  Tod is the Executive Vice-President for the R.H. Peterson Company, a local manufacturer of barbecues and fireplace products.  He and his wife, Beth, have three children; Philip, Abigail, and Benjamin and four grandchildren.  All of their children have attended Downey Unified schools.

As an active volunteer, Tod has been a 20-year member of PTA and is a past member of the Warren High School Academic Booster Council.  He is very involved with the Downey YMCA, having served in the following capacities:  YMCA Board of Managers – Chairman, Treasurer, Finance, Facility Development, Camp Program, and Annual Fund Raising Committees.  He has been active as the Past-President of Northwest Downey Little League Baseball; Downey Los Amigos Kiwanis Club member (over 30 years); National Propane Gas Association Board of Directors; Hearth, Patio and Barbecue Association, former DJAA parent, and Downey Police Citizens Academy graduate.

Tod has also been Chairman of the Downey YMCA’s annual Christmas Tree Lot for 30 years.  This fundraising event provides funds for many YMCA youth programs including the camping activities.  For 44 years Tod has directed the YMCA Easter Caravan for middle school boys. Each year over 100 people attend this character-building camping experience.

Tod Corrin was elected to the Board of Education in 2003.