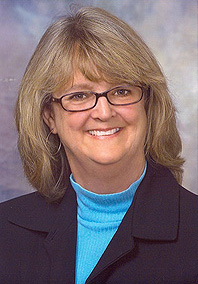 Nancy Swenson has been a member of the Board of Education since 2005.  As a Board member, she has been a very hands-on member of various teams.  Nancy has been a member of both the Budget and Audit committees, as well as members of the CHARACTER COUNTS! Coalition and the Late Start Committee.  Because of her passion for getting technology into the hands of teachers and students, she has been on the Technology five-year planning team and was the Board of Education’s representative on the Common Core Coalition transition team.  Nancy has coordinated several visits between Raytheon engineers and some of the Project Lead the Way (PLTW) engineering students.  She attends many after school functions that include: music and drama presentations, back-to-school nights, open houses, student awards, and Trunks & Treats events (where you can occasionally see her dressed up and handing out treats).  She annually visits school sites while classes are in session, participates in Read Across America events at various schools, and coordinates and participates in annual student interviews for the Mary R. Stauffer Foundation scholarships.  She truly enjoys interacting with the students and staff.

Nancy is a very active volunteer away from her role as Board member.  She spends many hours supporting the Mary R. Stauffer Foundation, where she holds the position of Chief Operation Officer. She has been a member of the Assistance League of Downey Gypsy Johnson Auxiliary since 2010.  As a Gypsy, she has held the position of Chairperson for two years and has been the Operation School Bell Gypsy chairperson for the past four years.  She is also currently the assistant treasurer for the Gypsy auxiliary.   Nancy is also a member of Downey Symphony Guild, Sister Cities Association and has been a member of Gangs Out of Downey (G.O.O.D.) since 2005.  She has received the Soroptimist Distinguished Woman award and was one of the inductees into the first Warren High School Hall of Fame.  Nancy was even appointed to the inaugural Green Team for the City of Downey.

As a Board of Education member, Nancy has always been driven to do the best she can to see that all children in Downey have an equal opportunity for an optimum education in a safe, learning environment that provides all students with college and career readiness skills.  She is so honored to be a part of the Downey Unified Board of Education and to have the opportunity to give back to a community that has given so much to her family.

Nancy has been a resident of Downey for almost 40 years and is a graduate of Warren High School. She earned an A.A. degree from Cerritos Community College as a Computer Programming Analyst and continued on to earn a B.S. in Business Administration:  Computer Information Systems, with Honors, from California State University at Dominguez Hills; this was accomplished by attending night classes as she worked full-time to support her family.

Nancy has two children who also attended Downey Unified schools and graduated from Warren High School. She volunteered her time while both her children were active in the Downey Little League and supported them as members of local Girl Scouts and Boy Scouts groups. Nancy tutored high school students in Algebra and even helped set up and operate the first computers for neighborhood family members and friends. Her daughter was an Assisteen within the Assistance League of Downey and is now a Downey Unified elementary school teacher. Her son was on the football team at Warren High and currently oversees several warehouses for a logistics company in Carson, Calif., where he is a supervisor.

Nancy recently retired from Raytheon Systems in the Space and Airborne Systems division after 28 years. Over the course of her employment at Raytheon (previously Hughes and GM/Hughes) there were several reorganizations.  She was often called upon to lead and/or participate on many teams related to financial changes and process alignment.  Her daily responsibility were to supervise various teams that were responsible for ordering and tracking an annual multi-million dollar budget for equipment and software in support of the West Coast operations.