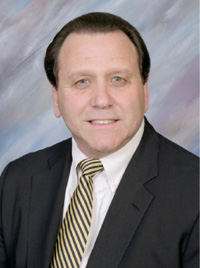 D. Mark Morris has been on the Downey Unified School District Board of Education since 1982. He has served as President of the Board of Education six times. He also is a member of the California School Board Association and the Los Angeles County School Boards Association. He was inducted into the Downey High School Hall of Fame and has a campus building named in his honor.

Mark’s community service includes past membership on the City of Downey Community Services Commission, the Water Board, the Redevelopment Project Area Committee, the Cerritos College Advisory Board and was the founding President of the Alumni Association.

He is currently a member of the Boy Scouts and has been a Scoutmaster, Explorer Advisor, President of the Frontier District and was a Silver Beaver Awardee. He is also a member of PTA and is active in his church, having served a two-year mission.

Mark retired from the City of Downey as a Housing Planner after 28 years. He also worked six years for the cities of Norwalk, Paramount and Alhambra. Mark is married to his wife Pam, a teacher, for 45 years. They have six children who have all attended Downey Unified schools and four grandchildren.