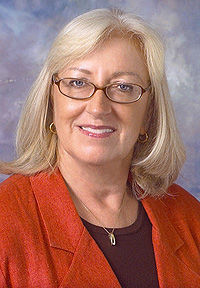 Barbara (Bobbie) Samperi was raised in Downey, California, and attended Downey Unified School District schools. Bobbie met her husband, Daryl, in high school and they have been married since 1972.
The Samperi’s two sons were both raised and schooled in Downey. While the children were growing up, Bobbie was very involved in their education.

From the time Bobbie’s first son started pre-school, Bobbie immersed herself in this cooperative learning environment. She served in many positions in the six years her sons attended Downey Playschool, including the last two years as president. Bobbie has been an active member of Downey Council PTA, Alameda School PTA, Ward School PTA, South (Sussman) Middle School PTA, and Downey High School PTSA. Bobbie has served on many District Ad Hoc committees, including elementary and middle school report card revisions and boundary changes. She served on the City of Downey Community Services Commission for 15 years. She also served on the City/Cal Trans I-105 freeway committee for many years.

Due to the increasing safety problems to school-aged children by the construction of the I-105 freeway and the many changes taking place in our schools, Bobbie decided to run for a seat on the Downey Unified School District Board of Education. She has been a member of the Board of Education since 1993. Bobbie works very hard to maintain our community values and high educational standards and is helping to continue to ensure the future of thousands of Downey students.